As the Federal Reserve pushed harder and harder on the economic brake pedal by increasing the Fed Funds Rate at the fastest pace in recent history, the housing market has slowed to a crawl.

In June the Federal Reserve announced that they had plans to “reset” the U.S. housing market, and that is precisely what is occurring today.

All year long the Federal Reserve has been in the news. Inflation had become enemy number one and they were going to do everything in their power to tamp down out-of-control inflation. Prices of goods, services, food, and energy were climbing at an unhealthy rate. Home values had soared by over 40% in just two years.

Jerome Powell, chair of the Federal Reserve Board, delivered speeches in December of last year, March, June, August, and September of this year, and with each speech the tone increasingly became more vigilant. At first, the carefully telegraphed message seemingly tiptoed around how far they were going to go to fight inflation, but by September, they seemingly were brandishing swords and shields, ready to go to battle.

In June, after delivering his prepared press conference remarks, Jerome Powell was asked about their outlook for the housing market. He stated that housing needed “a bit of a reset.” During the September press conference, a reporter asked for him to elaborate on what he meant by a housing “reset.” He did just that:

In economic terms, a correction typically means that home values drop between 10% to 20% from the peak. That peak occurred in May and prices have been on the decline in Southern California ever since. The issue is that mortgage rates have climbed at an unprecedented pace this year in response to all the Fed’s actions and statements, climbing from 3.22% at the start of January to 7.08% today, according to Freddie Mac’s Primary Mortgage Market Survey®. In the over 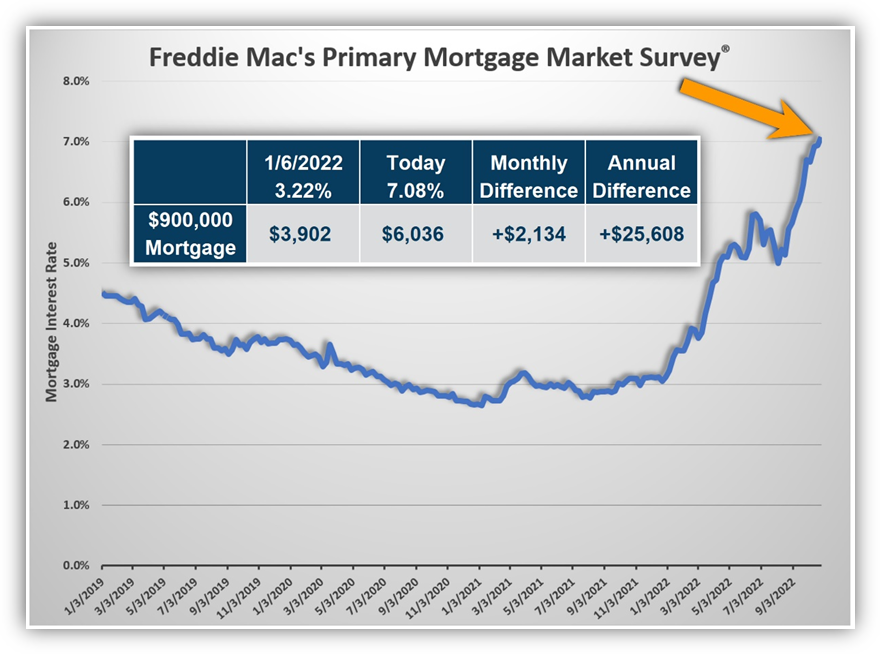 51 years in conducting the survey, mortgage rates have never climbed this much in a year, surpassing the prior record annual gain in 1981.

Demand, a snapshot of the number of new escrows over the prior month, has dropped to levels last seen during the initial pandemic lockdowns of April 2020, reminiscent of the start to the Great Recession. Today’s demand is at 1,270 pending sales, 48% less than last year’s 2,429 hot October reading. The 3-year average prior to the pandemic (2017 to 2019) was 2,180, an astonishing 72% more than today.

The supply of homes has increased dramatically after starting the year at record low levels, increasing from 954 homes on January 1st to 3,677 homes today, a 285% rise. It is up 97% compared to last year at this time but is well off the 3-year pre-pandemic average of 6,010 homes for this time of year. The inventory should have surpassed levels last seen in 2019, but it fell well short due to a lack of homeowners placing their homes on the market. So far this year there have been 6,198 missing FOR-SALE signs compared to the 3-year average number of homes placed on the market prior to COVID, 19% fewer. Homeowners are hunkering down and opting to stay put as they enjoy unbelievably low fixed mortgage payments. According to the Federal Housing Finance Agency, 71% of all Californians with a mortgage have a rate of 4% or lower, far below today’s 7.08% height.

Even though the supply of homes remains muted, uncharacteristically weak demand has resulted in the Expected Market Time, the amount of time between pounding in the FOR-SALE sign to opening escrow, climbing from a low of 19 days at the start of March to 87 days today.

A market time of 87 days is not even close to the start of the Great Recession when it eclipsed 365 days back in 2007, but the lack of affordability has reached a crisis level and values are slowly declining regardless of the lack of available homes. Today’s buyers are sophisticated and cautious in their approach to the housing market. They are unwilling to stretch and will not overpay for a home. It all boils down to value and they will patiently wait for the right home to come along.

For sellers, it is imperative to recognize that the Federal Reserve’s housing “reset” has arrived. Be prepared for mortgage rates to remain elevated until inflation moves in the right direction. Until then, demand will remain sluggish, market times will grow longer, and home prices will slowly and methodically decline.

The current active inventory increased by only 21 homes in the past two weeks.

The active listing inventory increased by 21 homes, up 1%, and now sits at 3,656. It has only risen by 39 homes total in the past six weeks. On average, the 3-years prior to COVID (2017 to 2019), the inventory fell by 8% during those same six weeks. It did not remain flat or rise slightly. Even with a limited number of homes coming on the market, demand is so subdued that the inventory is having trouble falling like it normally does during the Autumn Market. Typically, both supply and demand fall during the Autumn as fewer families participate in the real estate market since the kids are back in school. Yet, with very fewer buyers looking to purchase, the limited number of sellers coming on the market are not finding instant success. Many have had to adjust their asking price at least once. An astonishing 44% of all homes available today have reduced their price. Expect the active listing inventory to remain elevated until Thanksgiving. It will drop significantly during the holiday season until ringing in a New Year. The fewest number of homes come on the market in December and many unsuccessful sellers will throw in the towel and enjoy all the festivities of the season.

The new trend that developed this year is a sharp decrease in the number of homes coming on the market, homeowners “hunkering down” and not willing to move due to sky-high mortgage rates and being locked in at a low fixed rate. For the month of September, there were 2,301 new FOR-SALE signs in Orange County, 728 fewer than the 3-year average prior to COVID (2017 to 2019), 24% less. So far in 2022, there have been 6,198 missing signs, down 19%. These missing signs counter the potential rise in the inventory. 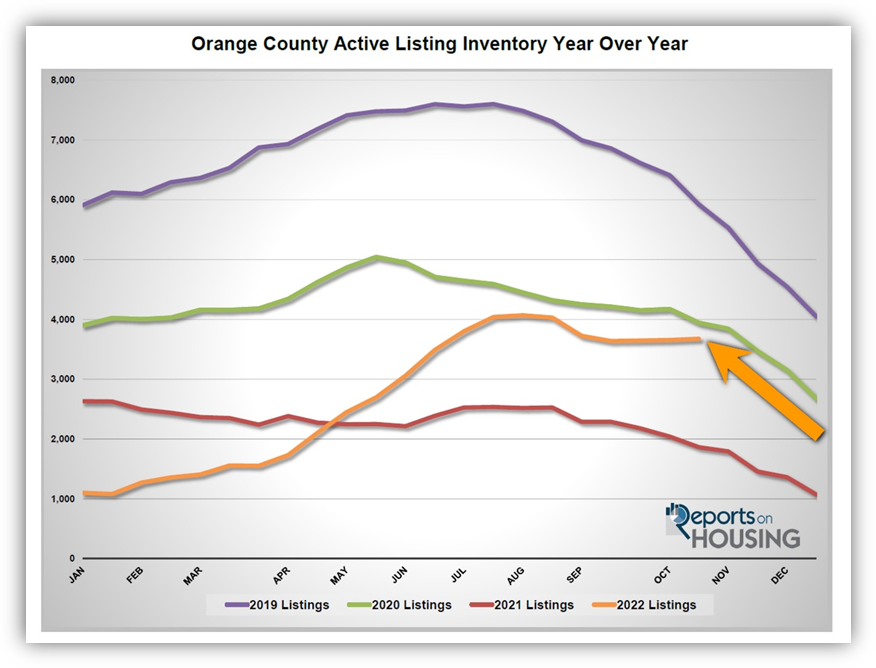 Demand continued to rapidly fall, dropping an additional 11% in the past couple of weeks.

Demand, a snapshot of the number of new escrows over the prior month, plunged from 1,427 to 1,270 in the past couple of weeks, shedding 157 pending sales, or down 11%. Since September 1st demand has dropped by 31%. The 3-year average drop prior to the pandemic (2017 to 2019) was an 11% drop for that same period. Current demand is at levels typically reserved for the first week of January. These levels have only been lower in April 2020, during the initial lockdowns of COVID, and the fall of 2007 after the subprime meltdown that instigated the Great Recession. Expect rates to remain at these elevated levels through the end of this year and well into 2023. Demand will be weak for the rest of the year and will be persistently sluggish in the foreseeable future. Expect demand to slowly drop through the end of the year. 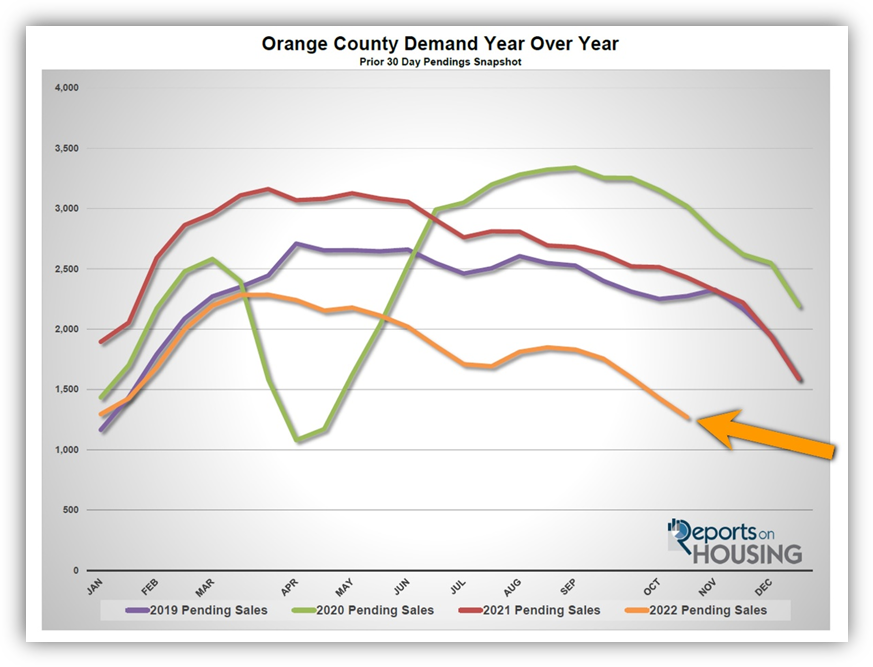 With supply rising and demand sinking, the Expected Market Time (the number of days to sell all Orange County listings at the current buying pace) increased from 77 to 87 days in the past couple of weeks, its highest level since mid-May 2020. Last year the Expected Market Time was at 23 days, substantially faster than today and home values were screaming higher. The 3-year average prior to COVID was 85 days, similar to today.

The luxury housing market cooled substantially in the past couple of weeks.

In the past couple of weeks, the luxury inventory of homes priced above $2 million decreased from 788 to 727 homes, down 61 homes, or 8%. Luxury demand decreased by 24 pending sales, down 16%, and now sits at 126. With demand dropping at a faster pace than supply, the overall Expected Market Time for luxury homes priced above $2 million increased from 158 to 173 days, its highest level since June 2020. With the instability of Wall Street, and the Federal Reserve’s directive to slow the economy in its fight against inflation, expect the luxury market to continue to slow through the end of the year.

Year over year, luxury demand is down by 82 pending sales or 39%, and the active luxury listing inventory is up by 207 homes or 40%. The Expected Market Time last year was 75 days, much stronger than today.

Have a great week.

Copyright 2022- Steven Thomas, Reports On Housing – All Rights Reserved.   This report may not be reproduced in whole or part without express written permission by author.