HAPPY NEW YEAR!!! Now, what does that mean for Orange County real estate?

First, let us look back at what happened in 2022 in terms of inventory, demand, luxury properties, and the Expected Market Time.

After starting the year with a record low number of available homes to purchase, the inventory soared higher but is still far below pre-pandemic levels.

The year started off with an active inventory of 954 homes, the lowest level to start a year since tracking began in 2004. The average start prior to the pandemic was 4,500 homes, so there was nearly nothing available in January. Yet, with a rapidly rising mortgage rate environment, demand slowed substantially as the year progressed. After starting 2022 at 3.25%, rates eventually surpassed 5% in May and eclipsed 6% in June. As a result, the inventory rapidly grew from mid-April until it peaked at the beginning of August at 4,069 homes, a rise of 327% from January 1st. The 3-year average peak prior to COVID (2017 to 2019) was 6,959 homes, 71% higher than this year. From August through year’s end, the number of available homes decreased to 2,642, very similar to 2020 levels and 41% below the 3-year average end to December of 4,479.

The inventory would have dropped even more during the Autumn market, but rates eclipsed 7% in October and took an even larger bite out of demand. Many sellers stagnated on the market without success. That changed during the holidays as rates dropped into the lower 6’s, and the inventory dropped by 939 homes in the last 6 weeks of the year, down 26%. The inventory is poised to drop below 2,500 upon ringing in a New Year, still not enough available homes to purchase.

COVID suppressed the inventory in Orange County in 2020 and 2021. There were 5% fewer homes placed on the market in 2020, or 1,795 missing sellers, and 6% fewer in 2021, or 2,311 missing sellers. With COVID taking a back seat to life in 2022, this was to be the year where more homeowners were poised to enter the fray. That did not occur as many homeowners “hunkered down” and opted to not move. Homeowners may not have been in love with their homes, but they certainly were in love with their loans. An astonishing 89% of California homeowners who have a loan are enjoying a 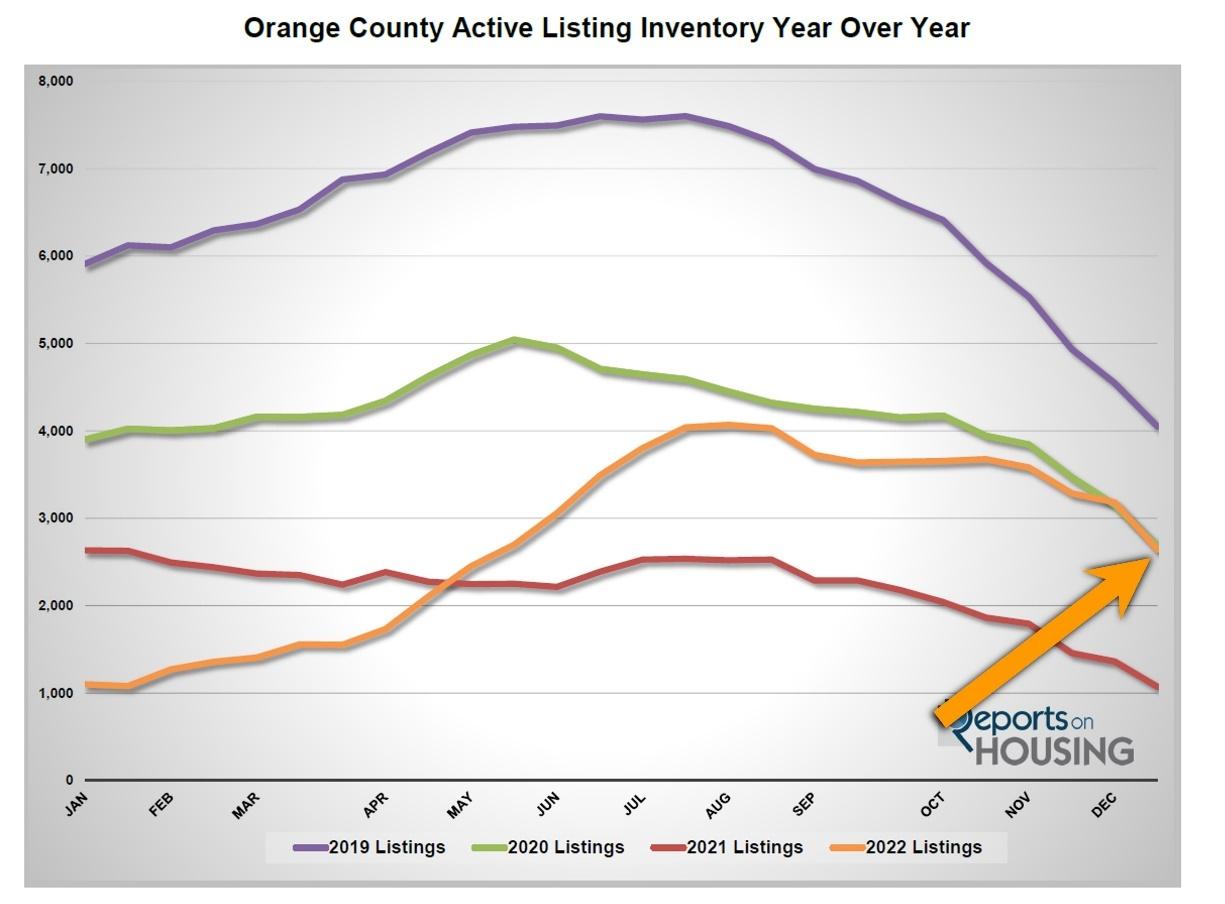 The inventory crisis continues, not because of excess demand, but due to homeowners opting to “Hunker Down.”

After two years of heightened demand due to historically low mortgage rates, demand did an about face and fell to its lowest levels since the Great Recession.

Demand for Orange County homes (the number of pending sales over the prior month) followed a normal strong housing pattern. The Spring Market was the hottest, followed by the Summer Market, then the Autumn Market, and, finally, the Holiday Market. Demand followed this seasonal pattern which mirrors when homes are placed on the market. The most come on during the spring and the least come on during the holidays.

At the beginning of the year, demand for Orange County homes (the number of pending sales over the prior month) was muted compared to 2021, down 31%. It was like the start of 2020, prior to COVID impacting housing. At first, demand was muted due to the lack of available homes to purchase. There were simply not enough homes on the market compared to the sea of buyers looking to purchase. But that dramatically shifted as the year progressed and mortgage rates spiked, considerably impacting home affordability. Even with additional purchase options, more and more homeowners accumulating and stagnating on the market without success, demand did not climb much.

After starting the year at 1,408 pending sales, demand peaked at the very end of March at 2,286, its lowest peak since tracking began in 2004. It was 28% lower than last year’s 3,162 peak, and 19% below the 3-year average peak prior to COVID (2017 to 2019) of 2,816. Demand only improved in August when rates dropped below 6% for a few weeks. As rates rapidly increased in September and October, demand plunged to lows not seen since the Great Recession. 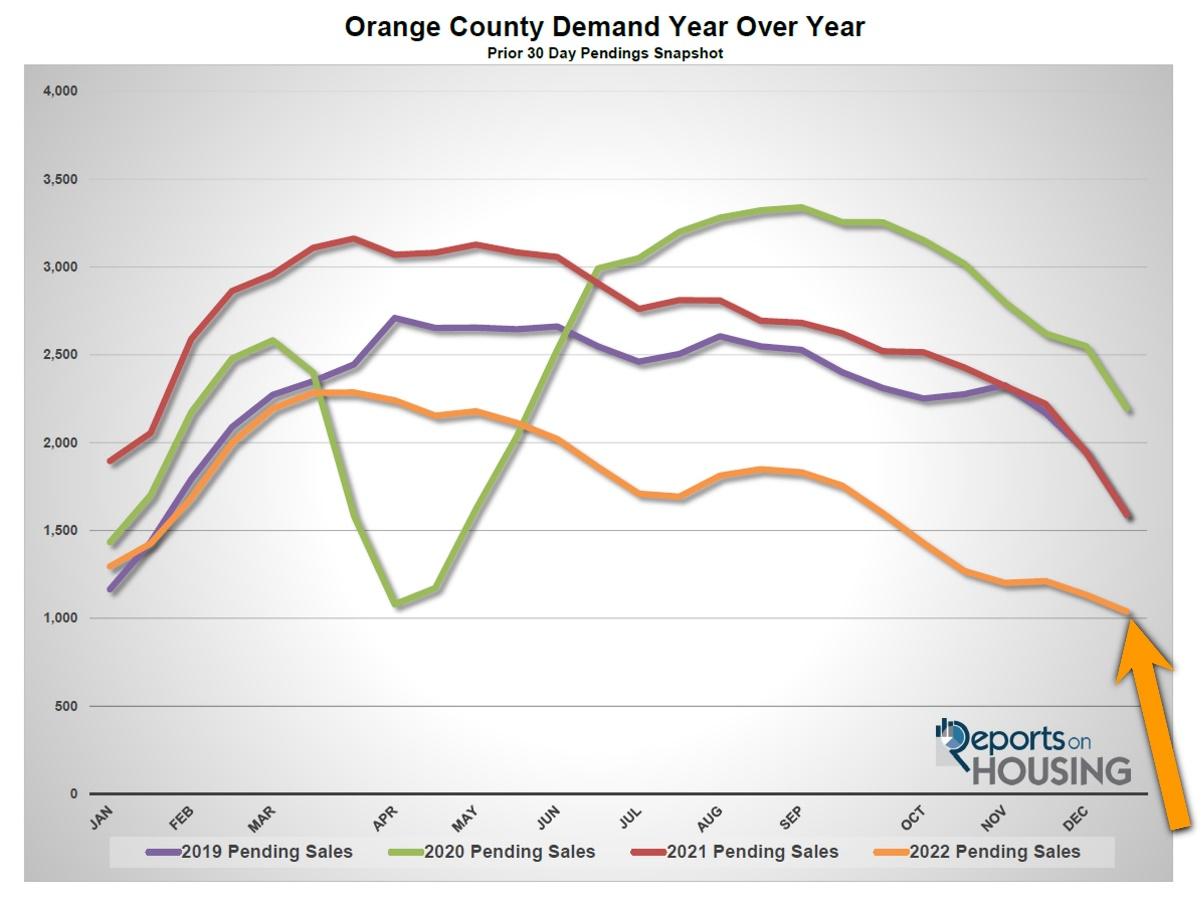 The luxury home market was at a record pace but fell short by 11% through November as luxury slowed substantially to wrap up the year.

The luxury home market started off extremely strong. In the first quarter of 2022, there were 17% more luxury sales year over year. The second quarter of 2022 was down 8%. It was down by 11% during the third quarter, and down substantially during the fourth quarter, off 47%.

During the pandemic, the luxury market evolved to an incomprehensible fast pace. Luxury homes that typically took months upon months to sell were selling almost instantly. In February, the Expected Market Time (the time between coming on the market and opening escrow) dropped to 45 days for homes priced above $2 million. As the volatility of the financial markets took hold, the luxury inventory rapidly increased as demand dropped. It surpassed the 100-day Expected Market Time level in June and nearly hit 200 days at the end of November.

As of the end of December, luxury demand is at 113 pending sales, 21% lower than last year. The inventory is at 554 after plunging by 21% during the last two weeks, 56% higher than last year.

The amount of time it took to sell a home continued to grow longer as the year progressed.

The Expected Market Time, the amount of time it would take to place a home listed today into escrow down the road (based upon current supply and demand), started the year at an extremely fast pace of only 25 days. It was an insane market that heavily favored sellers. Homes were flying off the market and buyers were willing to pay way over the asking price to obtain a home. It reached a record low level of 19 days at the beginning of March.

Yet, as mortgage rates continued to climb, demand receded, the inventory rose, and the Expected Market Time grew. It surpassed 40 days in June, after nearly 22 months below 40-days, an insane, nearly instant pace. It eclipsed 50 days in late June, 60 days in early July, and 70 days by July’s end. It retreated slightly in August when rates dropped back below 6%, but then increased as rates soared in September and October. It hit 89 days in November before retreating to 76 days by year’s end as rates eased to the low 6’s to finish off the year. In the past two weeks, the Expected Market Time for all of Orange County dropped from 84 to 76 days, identical to the end of December 2019. 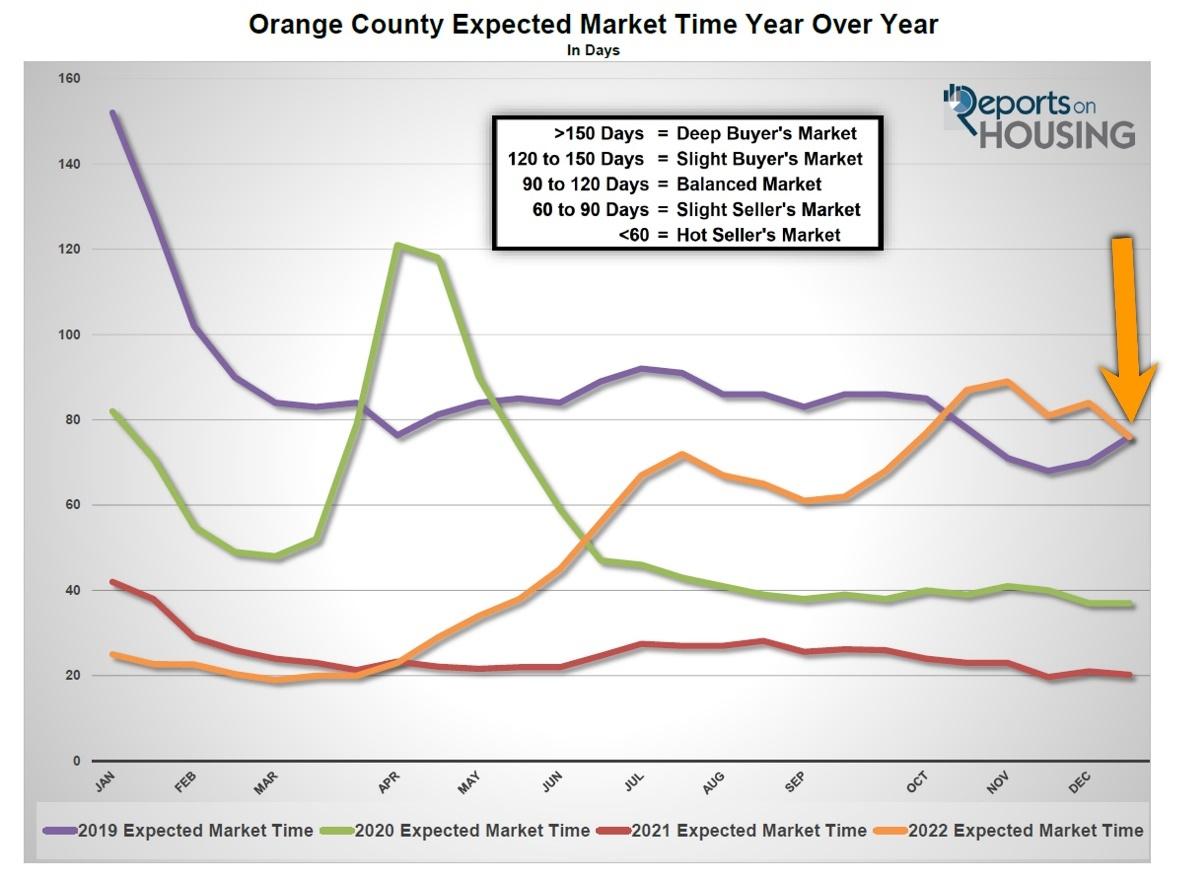 A subdued year for housing.

After two years of runaway home prices, the Federal Reserve stepped in to reverse engineer rampant inflation and has been utilizing the housing market as one of the main economic engines to achieve its objective. They increased the Federal Funds Rate from nearly 0% at the start of the year to 4.5% in December, its highest level since 2007 and its fastest rise in more than 40 years. Long-term mortgage rates responded rising from 3.25% at the start of the year to over 7.25% in October, more than doubling. They eased below 6.5% in December as inflation numbers began to improve for the second consecutive month. Yet, inflation remains elevated, up 7.1% year over year through November. It hit 9% in June. Core inflation, less the volatility of food and energy, is currently at 5.96%, after reaching 6.7% in September. The Federal Reserve’s core inflation goal is 2%, so they have a long way to go. The overall United States economy has remained resilient backed by a very strong labor market, sky-high job openings, low unemployment, and increasing consumer spending. Yet, the high-interest rate environment has been rocking the financial markets. The unrelenting Federal Reserve policies will eventually instigate an economic recession in 2023 that will most likely begin by mid-year. As a result, the local housing market is going to be subdued in 2023, especially in the first half of the year. Here is the forecast:

The bottom line: 2023 will continue where housing in 2022 left off, extremely sluggish. Housing is particularly interest rate sensitive, where even with anemic, low inventory levels, values will still drop due to severe affordability issues. Values will stop retreating only when mortgage rates drop below 5.5%, instigating more demand and more homeowners to stop “Hunkering Down” and list their homes at a more normal rate. The housing market is no longer insane, homes are for the most part not selling above their asking price, not selling immediately, not selling with multiple offers, and there is far less activity and buyer competition.

Copyright 2022- Steven Thomas, Reports On Housing – All Rights Reserved.   This report may not be reproduced in whole or part without express written permission from the author.